There are many advantages to learning more than one language. People who are bilingual have been shown to have better comprehension skills, like improved memory and problem solving skills, as well as the ability to multitask. As studying a new language also makes you a good listener, you’ll further understand your current language. This can make you more aware of your pronunciation, grammar, vocabulary etc.

More than 50% of the world’s population is bilingual, meaning that they speak two languages fluently. Learning a second language can provide many possibilities in your professional and personal life. Deciding what language is right for you is the first step of your journey. At Learn&Co we have many language experts to help you learn a different language, from Mandarin to Arabic. There’s no shortage of what we can offer you. After you’ve decided on the language that’s right for you, we’re here to support you every step of the way.

Whether you’re already in the process of deciding which language you want to learn, or you’re already set on what to pick, this article is here to help confirm your decision.

Which Languages Are The Best To Learn?

Some languages are more commonly used around the world than others, thus ensuring that you’re more likely to use it on a regular basis. For example, Mandarin with nearly a billion speakers. If you’re looking for a language that you’ll find useful instead of personal preference, research into what languages are widely spoken in the world. You can also search for which languages are more popular depending on where you are based.

China has one of the world’s top growing economies, with Chinese companies now not only being restricted to China but branching out across the globe. As it stands, Mandarin is one of the most spoken languages in the world, having the highest number of native speakers. Although native English speakers may find Mandarin a difficult language to learn, you definitely won’t regret it. With its current rate of growth, China’s economy is estimated to become one of the world’s leading economies by 2050. This makes it an extremely sought after language.

German is another strong contender when it comes to finding a useful language to learn to help you in the business world. The German economy has one of the strongest economies in the European Union, with a GDP of over 2.4 trillion Euros. Therefore, speaking German is undoubtedly a huge advantage for someone looking to take their career international. German is the fourth most spoken language in the world, with a total of 210 million speakers worldwide. Germany is also the densest populated country in Europe. Nearby nations of Belgium, Austria, Holland, Denmark, Switzerland, Liechtenstein, and Luxembourg also have German speakers allowing you to take the language further than just Germany. 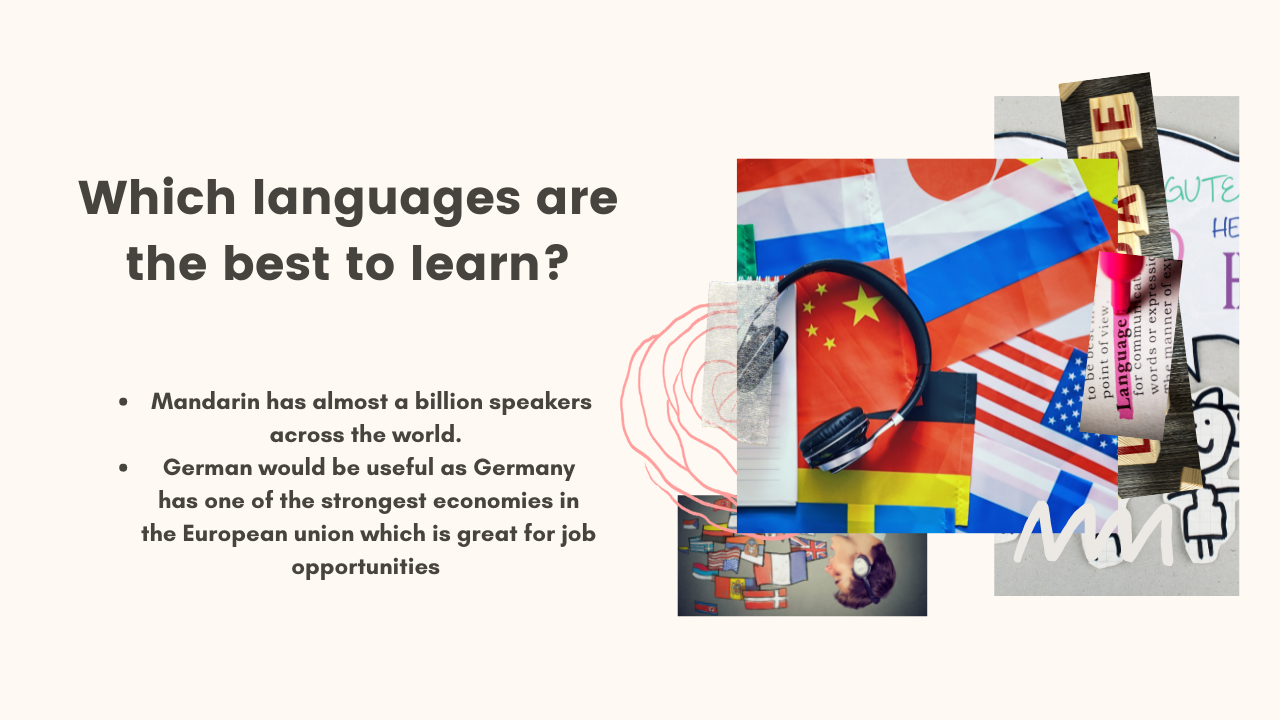 Is The Language Simple To Learn?

There are some things you need to consider before making your decision, like if it will be easy for you to learn. Consider if the language you’re trying to learn is similar to your current native language, in terms of sounds, structure and vocabulary. Depending on what you are already fluent in, some words may be easier for you to pronounce. For example, Italian and French share a lot of similar vocabularies. Thus, it may be easier for you to learn one if you are already well versed in the other. If you choose to study a similar language to your native tongue, it will make the learning process a lot smoother and more enjoyable for you. This could even motivate you to learn a third and even a fourth language. Doing some research on your current language may be the first step forward.

English is most similar to German and Dutch as they are all Germanic languages. Research shows that it’s easier for bilinguals to learn a third language, so learning something that’s simple to wrap your head around would be a good starting point. Then you can move forward to something more challenging afterwards. Of course, you do not have to start with something easy. Challenge yourself, push your boundaries, and see what you can do. 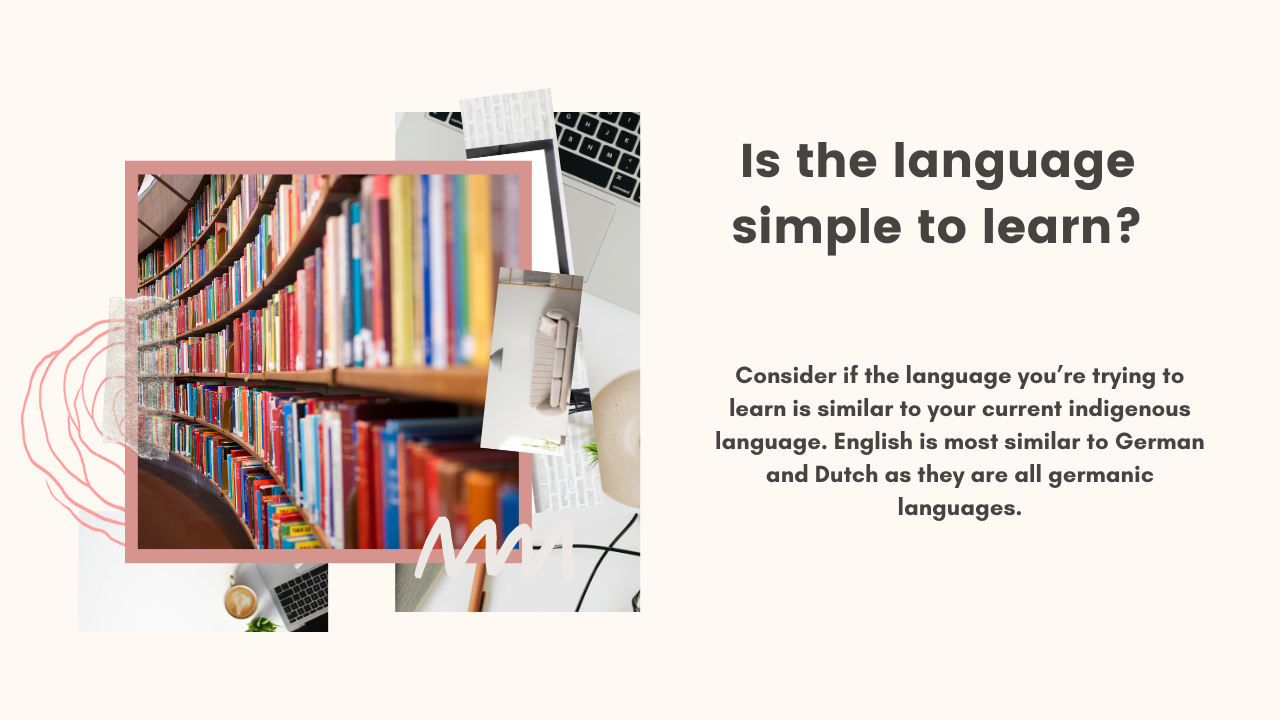 Why Are You Choosing To Study A New Language?

When learning a language, you will also learn about its cultural history. Ensuring the language you’re learning intrigues you is a crucial step to making the whole experience more enjoyable. You’ll be more interested in continuing your learning if you are genuinely interested in the culture and history associated with the language.

If your reasons are to expand your career prospects, you may want to choose a global and business language. Want to travel the world? Conduct studies into the continent you’re visiting: what’s the prominent language? Are there any specific dialects in the area you’re planning on going to? Travel is a key point when weighing your options. Think about where you want to explore, where you want to live in the future, or somewhere you have to travel for work. Is there anywhere specific in mind?

If you’re interested in Asian culture, you might want to look into Mandarin, Japanese or Korean. If you’re more into European culture, have a dig into German, French, Russian or Italian. Looking into their history and understanding the culture will help you immerse yourself and really experience and understand what you’re learning. This will also make everything run smoothly and quickly. Understanding where your interests lie will lead you to the language that is right for you. 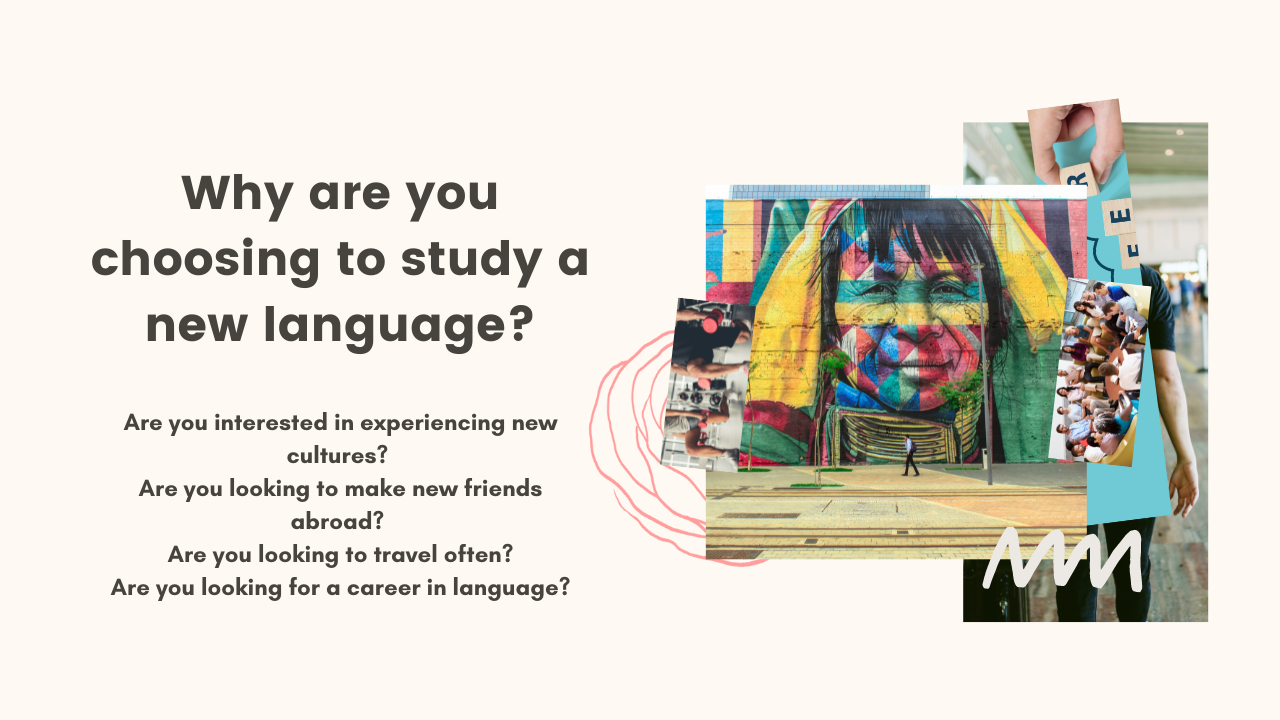 Will It Benefit You In The Future?

It’s best to consider learning a language that will help you in your future plans. Think about what fields you work in or what you plan to get into. For example, if your company is planning to expand overseas and set up a branch in the USA, maybe consider learning Spanish, as it is the second most used language in the Americas. Try thinking about where you see yourself in the future, and consider if the language you want to learn will help you progress and reach your goals. This way, it will be effective in the long term. 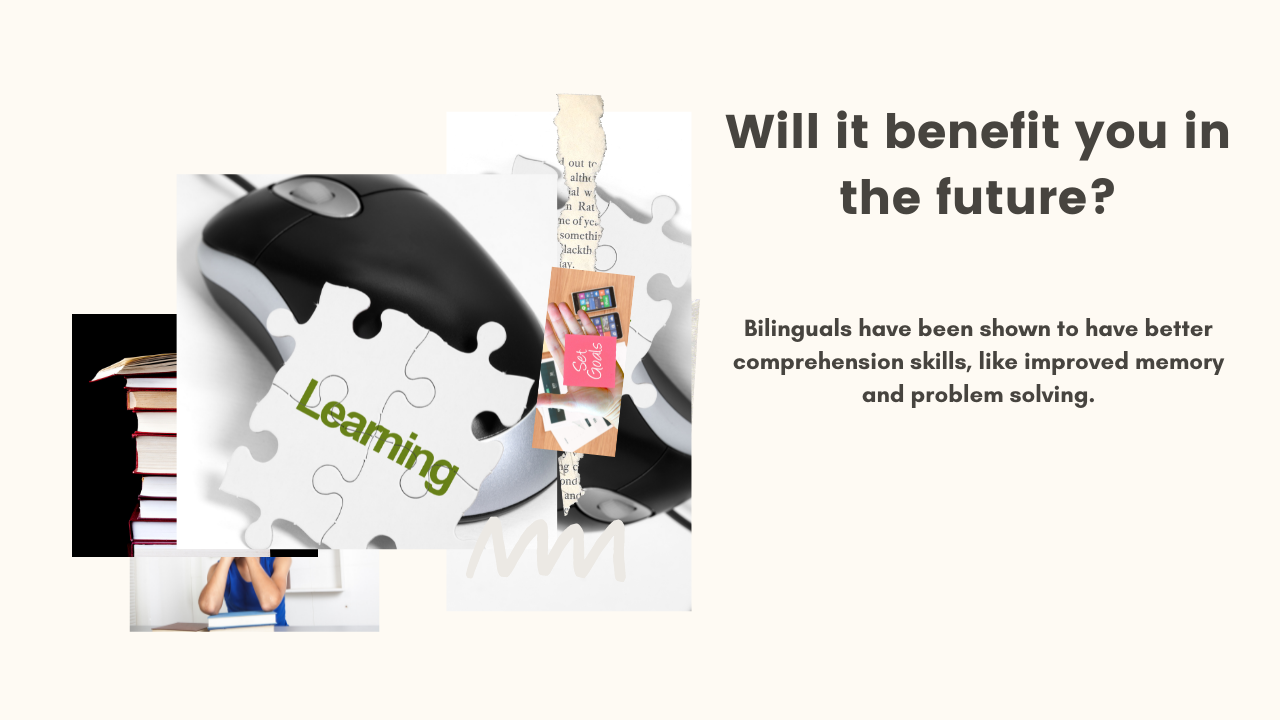 With the growing popularity of online language courses, you should be able to find a language suited for you. Take a look at the courses we provide. Even if you are currently studying a language and want to further your knowledge, you should be able to find a local class or an online resource. A few years back, you may have been limited in the ways of choice, but you can find language learning resources virtually anywhere. There are really no boundaries to what you can learn, even including dead languages such as Latin or Coptic. Although, we’re not sure how useful that’ll be for your future career plans.

If you’re looking for more modern languages, companies like Learn&Co offer you tailored one-on-one lessons all with native speakers. Our tutors ensure you get the full experience, such as how to properly pronounce certain words. We work with you to understand where your strengths and weaknesses lie, helping you to quickly understand and achieve your goals. 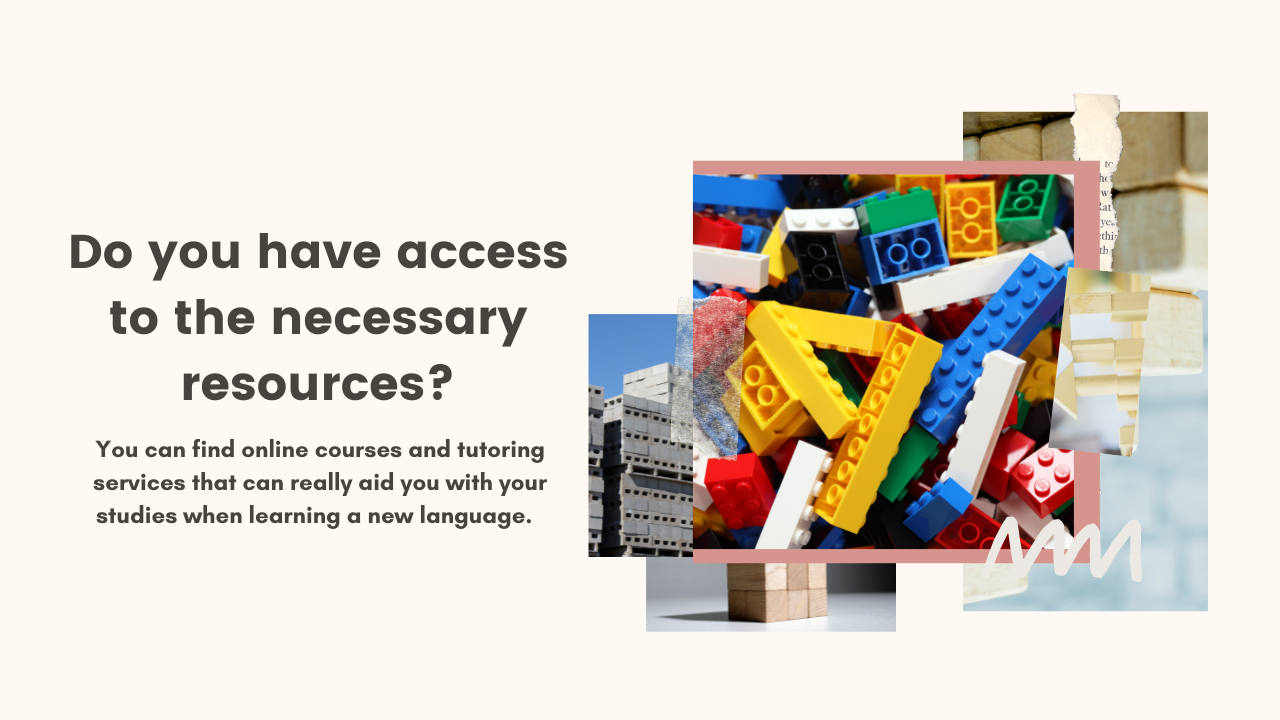 In conclusion, everything is really up to you. Although we can guide you in a certain direction, the choice is ultimately yours to make. We have given you information on the current most useful languages that are used in the business world, and also the most popular around the world. All languages have their advantages but it’s really your choice. See where your life is taking you or where you wish for it to take you. Where you’re located in the world and if one language would work better for you than the other. We have given you all the knowledge to take it from here. Whatever your decision is, we hope it can help you pursue your language learning goals. 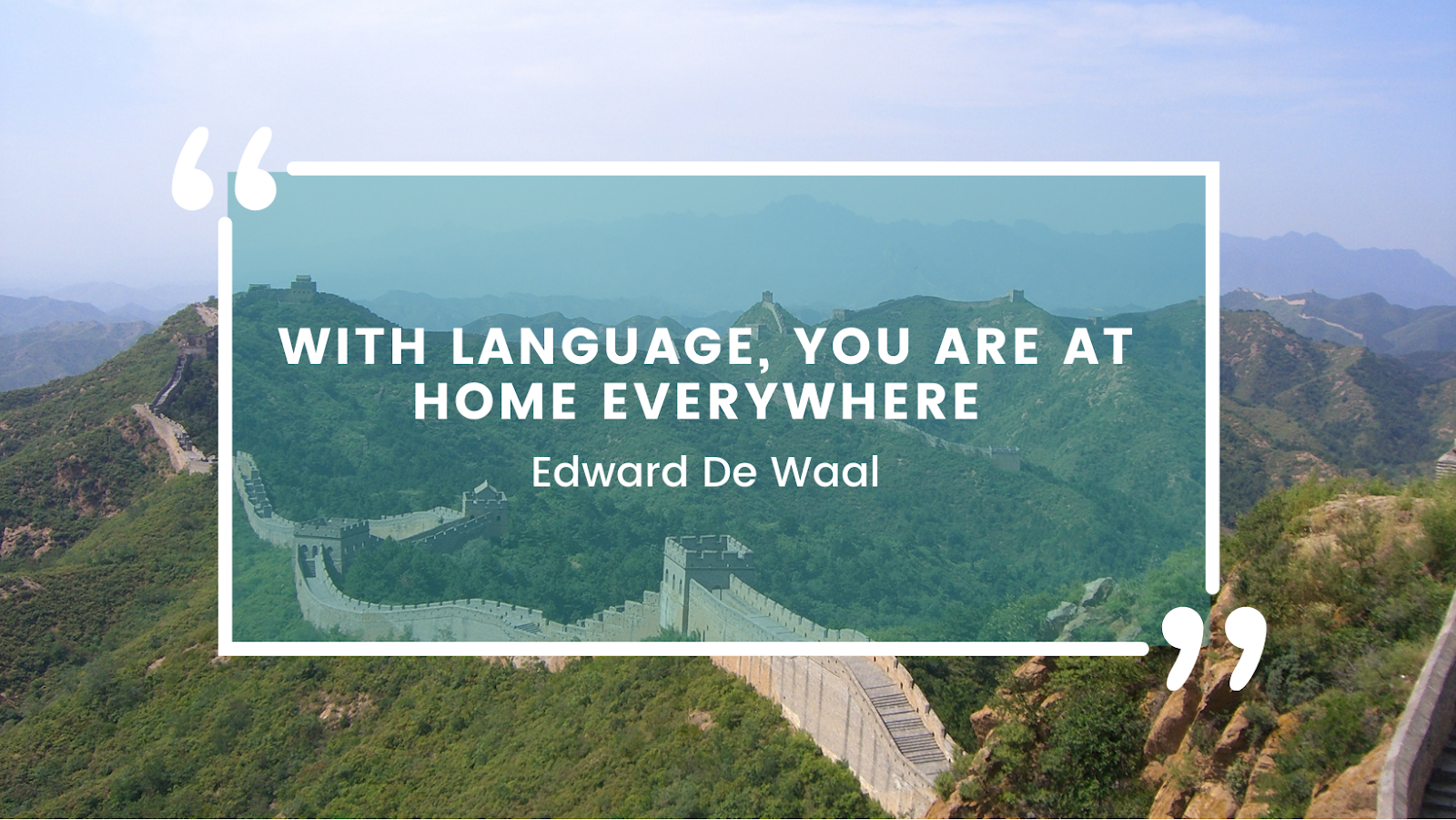